The store will not work correctly in the case when cookies are disabled.

We use cookies to make your experience better. To comply with the new e-Privacy directive, we need to ask for your consent to set the cookies. Learn more.

Cylinder arm sewing machines are great for sewing into hard to reach areas, corners, gussets or sewing cylindrical products such as leather bags. The open sewing area around the cylinder arm makes it easy to turn and maneuver the product being sewn without having to fold or roll the product.

The main differences between these machines include:

While the 2750 and 4800 are similar machines in terms of sewing performance, there are some differences between these two models:

Ultimately, both machines are suitable for most light to medium leather projects (as well as heavy fabrics) such as bags, belts, wallets, notebook covers, upholstery and more, however the 4800 does include some more modern elements and upgraded features.

Which machine is the best for me?

Your choice should be based on your needs and the types of products you plan on sewing. If your products have extremely narrow areas to sew into, the narrow cylinder arm of the 2600 may be useful.

If you want to sew a wide range of leather thickness from 1-2oz up to about ½”, you may need the powerful feeding mechanism of the 4800 and 2750.

If you require a machine that uses larger thread sizes, perhaps the 4800 or 2750 is most suitable.

What does the “PRO” package include?

Do I need a speed reducer?

For beginners and for those requiring the slowest sewing speed, a speed reducer pulley can be added, providing additional torque and speed reduction to the machine. The motor already equipped with the machine allows for very slow stitching (approximately 2 stitches per second). A speed reducer will further reduce the speed to approximately 1 stitch per second.

Can I convert a cylinder arm sewing machine to a flatbed machine for sewing flat products?

For added versatility, you can purchase a flatbed table attachment which is useful when sewing flat products, such as belts, wallets, journal covers and upholstery.

The Techsew 5100 features an extremely powerful feeding mechanism and is designed for sewing products up to 7/8” thick. It is not designed for thinner leather or materials below 5-6oz (2-2.5mm). If the majority of products you’re sewing are thinner than 3/8”, a light-medium cylinder arm machine such as the 2600, 2750 or 4800 is recommended. If you will be sewing with thicker leather (belts, thick leather satchels, harnesses, holsters, knife sheaths), the 5100 would be more suitable. 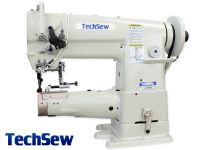 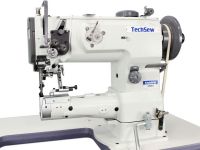 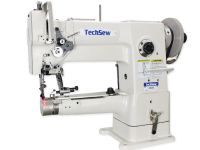 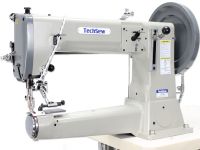